Prior to the America Invents Act (“AIA”), inventorship disputes were resolved by interferences, which considered who was the first to invent and whether the invention was derived from another. Under the AIA, the U.S. shifted from a “first-to-invent” system to a “first-inventor-to-file” system. The issue of derivation, also referred to “originality,” was preserved by the AIA in the form of derivation proceedings. Derivation proceedings under the AIA first-inventor-to-file system resolve inventorship disputes under 35 U.S.C. § 135. Any patent application containing a claim with an effective filing date on or after March 15, 2013,[1]is subject to the AIA derivation proceedings. The high evidentiary bar under AIA derivation proceedings and the low institution rate suggest that these proceedings require a strong presentation of evidence in the petition just to pass the institution stage.

Derivation petitions are filed with the Patent Trial and Appeal Board (“PTAB”) and although similar to inter partes reviews and post-grant reviews in terms of procedural rules,[2]institution for a derivation proceeding requires showing that an individual named as an inventor in an earlier application (1) derived such invention from an individual named as an inventor in the petitioner’s application, and (2) the earlier application claiming such invention was filed without authorization. 35 U.S.C. § 135(a)(1); 37 C.F.R. § 42.405(b)(2). For the PTAB to grant a derivation petition, the petitioner must provide “substantial evidence that, if unrebutted, would support a determination of derivation.” 37 C.F.R. 42.405(c). If the derivation petition is granted, “the party asserting derivation must establish prior conception of an invention and communication of that conception to an inventor of the other party. Global Health Solutions LLC v. Marc Selner, DER2017-00031, Paper 25, at *4 (P.T.A.B. April 6, 2022). Both conception and communication of that conception must be corroborated. Id. at *4-5. As a result of the derivation proceeding, the PTAB may change inventorship or reject/cancel the respondent’s claims.[3]

Not Much Uptake So Far

Since the inception of derivation proceedings in 2013, only 23 have been filed. Of these, only one has gone through to a Final Written Decision: Andersen Corp. v. GED Integrated Solutions, Inc., DER2017-00007.[4]This provides some indication of how difficult it is to show an invention was derived. 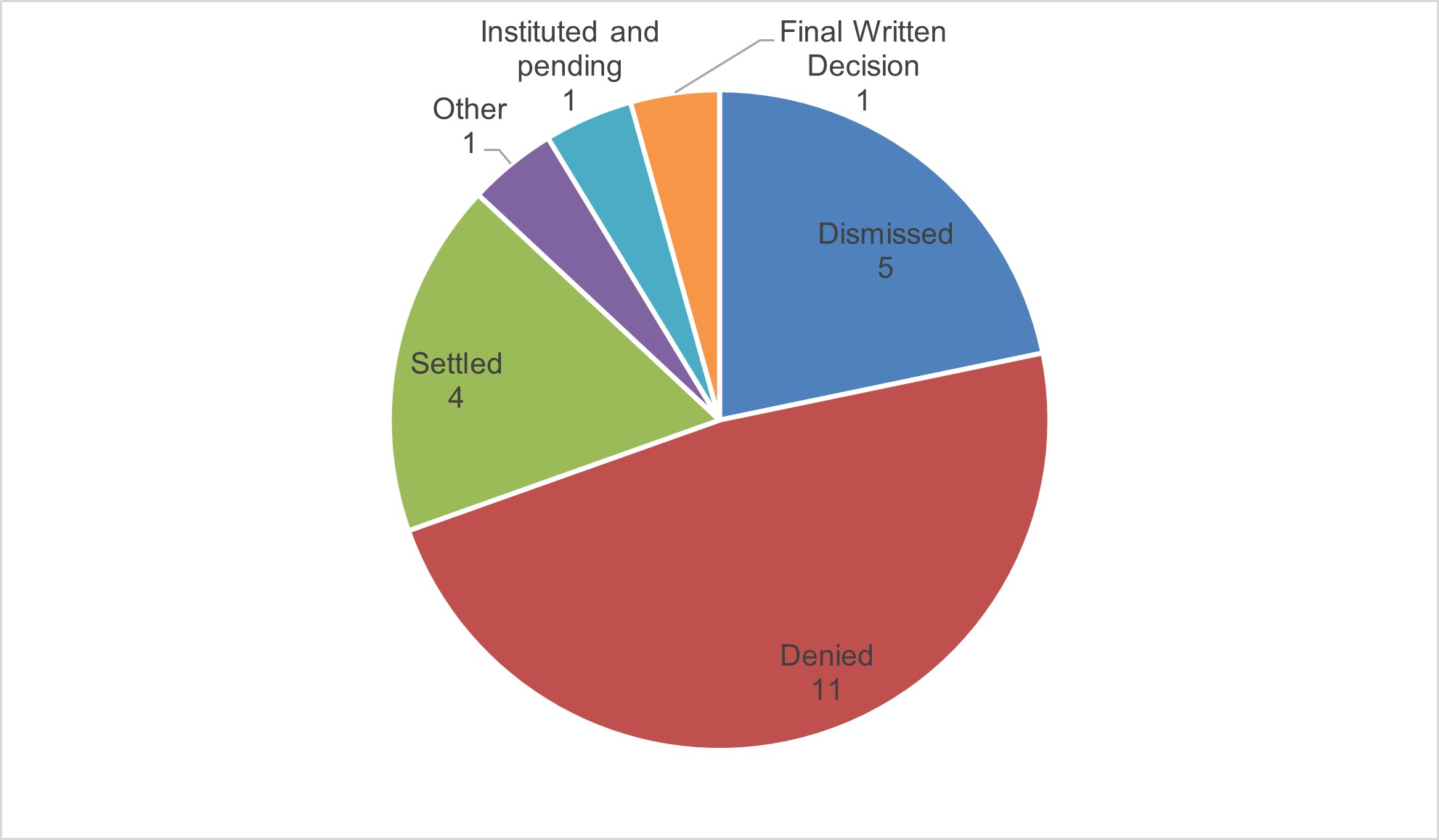 The Petition asserted that “it was not known prior to Burnham’s conception and the February 14, 2014 communication of the specific method steps whether the stable suspension could be prepared at all.” Id. at *6. The PTAB accepted this statement as true for the purpose of deciding whether to grant the petition. Id.

Conception of the Invention

Petitioner’s proof of conception was contained in emails dated February 7 and 14, 2014, sent from Burnham to a company Pro-Tech and copying Selner, and an email from Burnham to Selner on February 28, 2014. In addition, Petitioner submitted a manufacturing outline from Pro-Tech that Burnham signed and returned, confirming the manufacturing steps carried out by Pro-Tech to make the stable suspension. Id. at *9.

The PTAB found this evidence sufficient to support conception by Burnham except for the requirement of independent corroboration. Id. Petitioner’s counsel, however, submitted a declaration attesting to his efforts to obtain a declaration from a Pro-Tech representative, Meeuwsen. Id. Those efforts were unsuccessful, but Petitioner’s counsel did interview Meeuwsen and represented that, if subpoenaed, Meewsen would testify to authenticate his email correspondence with Burnham and the Pro-Tech manufacturing documents. Id. at *10. Therefore, the PTAB concluded that the lack of independent corroboration for the alleged conception did not render the Petition insufficient to support institution. Id.

Communication of the Invention

Similarly, the evidence of communication was sufficient, but lacked independent corroboration. Petitioner’s counsel’s testimony regarding Meeuswen’s expected testimony in response to a subpoena avoided “a critical deficiency for the Petition” at this stage. Id. at *11.

36. A non-separating, non-coalescing, non-flocculating stable suspension essentially consisting of water, petrolatum and at least one cationic biocide; and optionally mineral oil, where the at least one ionic biocide is contained without nanovescicles having a diameter of 100 microns or less.

Petitioner identified claim 1 as corresponding to the invention disclosed to the Respondent. Id.

The PTAB held, however, that it was “manifestly evident, without need of any explanation” for institution purposes that Petitioner’s claim 1 anticipates the invention disclosed to the Respondent. Id. 37 C.F.R. § 42.405(a)(2)(i) was met. Id.

Petitioner identified the invention disclosed to Respondent as:

Place the petrolatum in ingredients of 1 kg in a clean stainless steel container. Heat the petrolatum until semi-solid which will appear white not clear (40-45 c). The consistency will be of an almost liquid. Stir constantly if possible once this state is achieved.

Respondent’s claim 31 was the only claim the PTAB found was not adequately shown to be the same or substantially the same as the invention disclosed to Respondent:

31. The method of claim 30, wherein the at least one ionic biocide compound is a combination of PHMB and benzalkonium chloride, utilizing the salt forms where necessary where necessary to obtain an ionic state.

The PTAB found that, for this claim, Petitioner’s changing definition of “the invention disclosed to Respondent” doomed its showing. The PTAB required this definition to stay the same across Petitioner’s “multiple analyses of the ‘same or substantially the same’ inquiry” for different claims. Id. at *23. “Petitioner already selected the specific steps described in the email communication of February 14, 2014, as the invention disclosed to Respondent, and therefore cannot start over with a differently stated set of elements or steps.” Id. Since the PTAB found no explanation of how Respondent’s claim was anticipated or made obvious by the method communicated on February 14, 2014, the challenge to claim 31 failed.

The PTAB instituted the derivation proceeding for all challenged claims except claim 31. Id. at *26.[5]

Despite granting the derivation proceeding, the PTAB repeatedly qualified its conclusions that the record before them was only sufficient for purposes of institution.

The degree of proof required for a derivation proceeding can be daunting. Even in this case, which has relatively strong documentary and (expected) testimonial evidence, the PTAB’s repeated comment that the evidence was only sufficient for institution purposes clearly indicates that proof of derivation is a tough bar to meet.

One practice tip is clear though: as Petitioner, try to rely on only one definition of “the invention disclosed to Respondent.” According to the PTAB, “multiple articulations at different degrees of specificity” are not allowed. Id. at *19.

Where Petitioner communicates information of differing scope to Respondent, it is not clear why Petitioner must choose only one articulation of “the invention disclosed to Respondent” to compare to all of Respondent’s claims. This is a very strict standard. Just as Respondent’s claims may vary in scope, Petitioner’s communications may vary in scope, with a broad disclosure given on one date and supplemental disclosure provided on a later date. Arguably, the derivation analyses should be driven by the entire content of the communications from Petitioner to Respondent, without requiring Petitioner to limit itself to one articulation or subset of those communications. Inventions conceived by one and communicated to another should not be patentable to the recipient, who derived the inventions and is not an inventor.

[5] This highlights another difference between derivation proceedings and other AIA post-grant proceedings such as inter partes reviews (IPRs) and post-grant reviews (PGRs). IPRs and PGRs, under SAS Institute Inc. v. Iancu, __U.S.__, 138 S. Ct. 1348, 200 L. Ed. 2d 695 (2018), must be instituted on all challenged claims and grounds. There are no partial institutions.

A Decade under the America Invents Act (AIA)

10-Year Anniversary of the AIA at the PTAB―Not Your Grandparents’ U.S. Patent Law

AIA Anniversary: Reflecting Back and Looking Toward the Future

Preparing for Your AIA Argument