The patents describe thermoformed plastic trays for use in food packaging, such as those wrapped in a plastic film. The trays are made from a plastic sheet that is heated, shaped and cut. The cut edges in such trays can be sharp enough to tear through the plastic wrapping film or cut the skin of workers handling them. The inventions overcame this problem by using a heated press to curl the cut edges inward, leaving a smooth, rounded border. Prior to curling, the cut edge has a flange profile (see element 160 in Fig. 1A) that is designed to be deflected inward by the heated press (see element 300 in Fig. 1C): 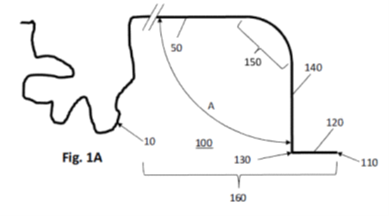 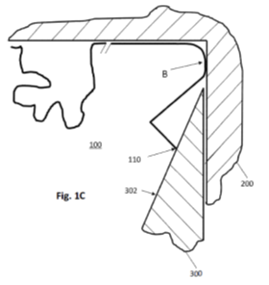 Tekni-Plex challenged most claims of all three patents over several references, including Portelli (WO 96/01179) and/or Portelli in view of Long (WO 2012/064203). IPR2021-00916, Paper 70 at *18. Converter did not dispute Tekni-Plex’s assertion that Portelli discloses every limitation of claim 1. Id. at *38. However, Converter argued that plastic trays made according to the Portelli disclosure would be defective, citing expert testimony, statements from the prosecution history of Long, and Portelli’s own drawings. Id. at *19-22. Converter used this “defective” rationale to argue that Portelli does not enable a person of ordinary skill in the art (“POSITA”) to make the claimed article without undue experimentation, and that Portelli was therefore inoperative. Id. Converter also argued that Long does not enable a POSITA to make its disclosed plastic tray by any process “amenable to mass manufacturing.” Id. at *33.

Tekni-Plex countered that Portelli’s trays at most carried a risk of defects, that the risk was understood, and that a POSITA would know how to overcome it without undue experimentation. Id. at *22-23. Furthermore, Tekni-Plex argued that articles made according to Long’s disclosure had been in actual production since at least 2012 and were therefore enabled.

The Board noted that prior art references are presumptively enabling (id. at *19) and held that none of Converter’s arguments overcame that presumption to render the prior art inoperative. Id. at *31. With respect to Long, the Board held that Converter’s arguments were based on a flawed understanding of the claim scope. Id. at *33. Furthermore, the Board noted that a reference applied under § 103 need not be self-enabling and is a valid reference for “all that it teaches.” Id.

The Board responded to Converter’s Wands factors arguments in turn:

Converter argued that Portelli’s thermoforming process was known to fail, relying partly on statements from the prosecution history of Long’s New Zealand counterpart that “puckering and distortion of the lip . . . often occurs with known thermal deformation processes.” Id. at *20 (quoting Pat. Office Response at 13). Converter also pointed to Portelli’s Figure 8 (as annotated by Tekni-Plex’s expert) to show this very type of “puckering and distortion” on the curled rim. Id. at *21. Finally, Converter claimed the Tekni-Plex’s expert admitted inoperability by stating that manufactured articles will be defective when “an edge adheres to a die,” and that this adherence is precisely what happened in their own expert’s simulations. Id. Converter concluded that, per factor 3, Portelli shows no working examples that could refute their evidence of inoperability.

The Board was unpersuaded and agreed with Tekni-Plex that Portelli was enabling. First, the Long statements say that puckering distortions occur often, not always. Id at *23. Second, the supposed “puckering” in the annotated Portelli drawings were not features at all, but simply “a product of the enlargement of manually-drawn images.” Id at *24. Third, Tekni-Plex’s expert did not admit inoperability; he merely stated “the unremarkable fact that if an edge of an article [is] stuck to a die, it might be defective.” Id. at *22. Tekni-Plex further identified several flaws in the simulations proffered by Converter’s expert and pointed to statements that the problems Converter cited for inoperability had known solutions. Id. at *24-25. Finally, in response to Converter’s “working examples” argument, the Board held that such examples are not required to show enablement.

Factors 4 and 7: Whether Thermoforming was a Mature Technology

Converter characterized thermoforming as a highly unpredictable field. Id at *25. As such, Portelli was not enabled in view of its failure to explicitly describe various process parameters related to thermal expansion and deformation. Id. at *25-26.

However, the Board agreed with Tekni-Plex that thermoforming was a mature art that had been practiced for “many many years.” Id. at *26. Portelli disclosed its processes in sufficient detail, and Converter failed to explain exactly what was missing. Id. at *26-27.

Finally, the Board dismissed Converter’s arguments that Portelli’s article was not feasible for high-volume mass production, stating that “the claims do not require any particular production volume.” Id. at *27.[i]

On factor 2, Converter argued that Portelli’s specialty equipment failed to provide guidance to a POSITA, because they “would not know what a ‘clacker box’ is nor would . . . be able to obtain the specifications needed to make one.” Id. (quoting Pat. Office Response at 28). But Tekni-Plex argued that Portelli was clearly disclosing a known component by a strange name, and the Board agreed. Id.

Factor 1: Quantity vs Quality of Experimentation

Although Wands factor 1 identifies “the quantity of experimentation necessary” for enablement, the Board noted that enablement as a whole is “not merely quantitative.” Id. at *30 (quoting PPG Indus. Inc. v. Guardian Indus. Corp., 75 F.3d 1558, 1564 (Fed. Cir. 1996)). Thus, a large amount of routine experimentation may be acceptable. Id. The Board held that Converter, who argued that many aspects of the production process would require experimentation, had failed to identify why any of that experimentation would be “undue.” Id.

Whether Long is Inoperative

The Board held that Converter’s argument against Long, that it did not enable a POSITA to make a plastic tray “via any process amenable to mass manufacturing,” was fundamentally flawed. Id. at *33. Since the claims do not require mass manufacturing, that aspect need not be enabled, and Long may be relied on for “all that it teaches to show obviousness.” Id.

To disqualify a prior art reference as inoperative, the reference must not enable any working version of the challenged claims. Prior art is presumptively enabled, and the patent owner will bear the burden of production on the issue of inoperability. It may not be not enough to show that a prior art product will often be defective, if one skilled in the art would have known how to adjust for such defects without undue experimentation. Nor does it matter whether mass production is feasible if the challenged claims fail to require it.

Under § 103, a reference need not be self-enabling. It will be considered enabled with respect to all that it teaches. If the portion relied on to show obviousness is enabled, the reference will not be held inoperative.

Finally, take care when relying on drawings to illustrate an argument.  Make sure that the alleged “defect” on which an argument rests is not a side-effect of reproducing manual drawings.

[i] While Converter did not expressly address Wands factor 8 (breadth of the claims), the Board raised this same rationale under that category in the third and final IPR, 2021-00919. Paper 77 at 20-21.

Patent Protection for Software-Related Inventions: Patent Law in Europe and the US

Patent Infringement: When Is a Product Sold “Within the United States”?