Everyone is talking about unicorn companies—a very rare breed of private company with a valuation of at least a billion dollars. Venture capitalist Aileen Lee coined the term “unicorn” in 2013, because just like the mythical creature, the statistical chances of finding such high value in a private company are quite low. Even today, with approximately 90 million companies in the top 10 jurisdictions worldwide, only 600 companies are unicorns.

As with companies, patent portfolios can also be unicorns. A unicorn patent portfolio is a group of patents, strategically crafted to block competitors from entering a market segment.  There are three types of patents.

Unicorn Patents- Highly strategic, rare patents, that either alone or in combination with others in a portfolio block competitors from entering a high-value market segment. 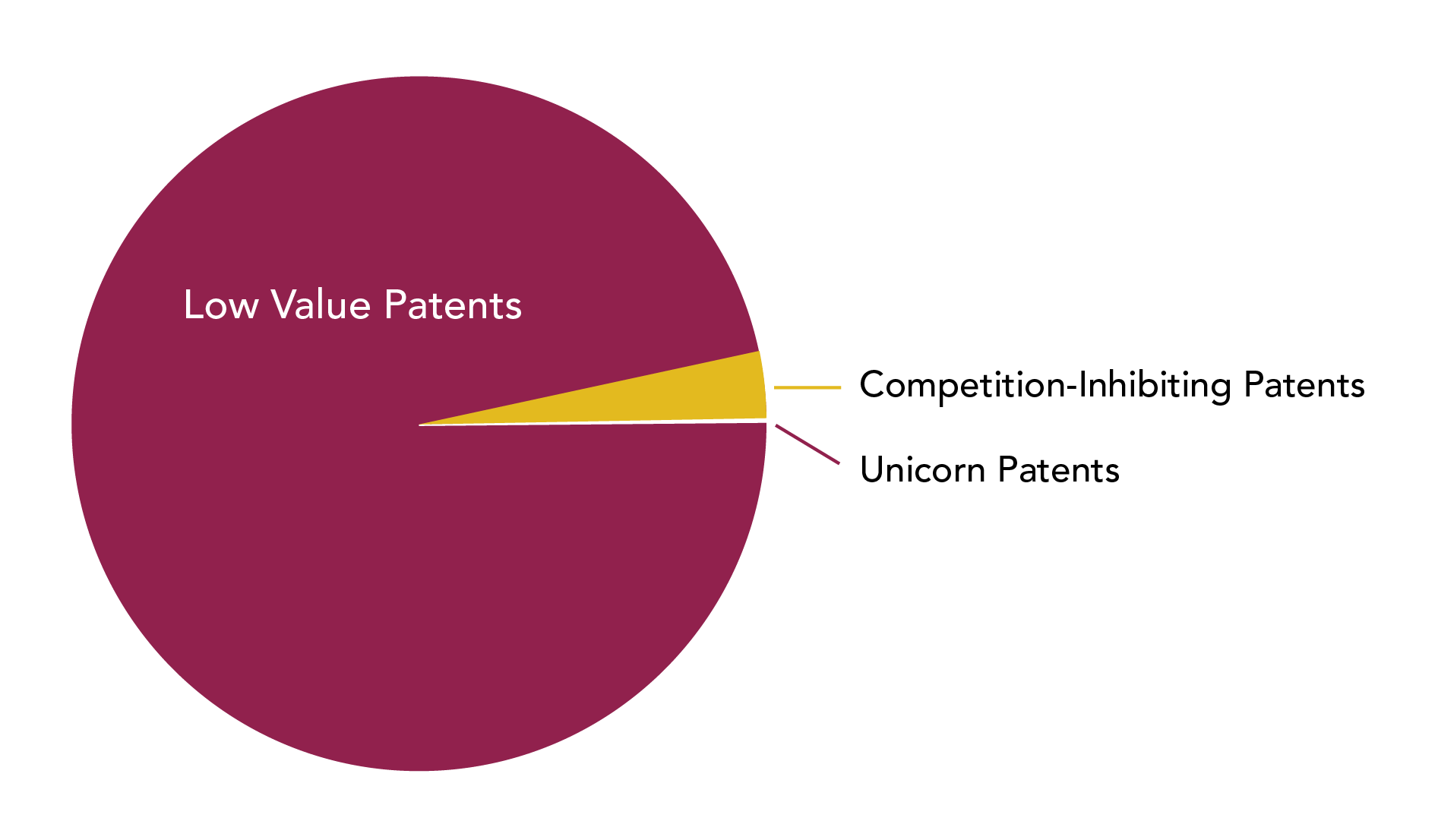 To understand the differences and improve your company’s patent value, it is helpful to consider the following hypothetical based on real world facts. Roughly 40% of the world’s fruits and vegetables are wasted each year. This is due in part to spoilage during shipping. Elimin8waste is an AI company dedicated to solving this problem. In a fraction of a second as produce moves along a conveyor, the company’s technology senses five different parameters, and using a uniquely trained AI model, predicts shelf-life with 95% accuracy. Pieces of produce with longer shelf-lives are automatically sorted for long-distance shipping. Produce with shorter shelf-lives are sorted for shorter-distance shipping to arrive more quickly, enabling purchase and consumption before spoiling. Elimin8waste estimates that its technology has potential to save tens of billions of dollars each year.

The CTO of the company, Dan Mah, invented the company’s AI training model and is excited about patenting it. Sara Tal, the chief scientist, invented the underlying idea of estimating shelf-life based on a specific combination of parameters including sensed moisture, bacteria, mold, oxidation and physical damage. Tal wants to patent shelf-life estimation based on that specific combination of sensed physical parameters.

If Elimin8waste were to patent either invention as suggested by the inventors, the resulting patents would likely have low value. Here’s why.

A competitor might avoid infringing a patent on Mah’s training model by adopting a different training model that achieves a similar result. Moreover, even if a competitor copied Mah’s precise training model, how would Elimin8waste know? Model training occurs in an undetectable manner behind the scenes. If patent infringement cannot be detected, it cannot be stopped. Worse yet, since patents must describe the details of the invention being patented, Mah’s patent would necessarily teach the invention to competitors, while leaving Elimin8waste with no way of detecting the infringement. Mah’s training model is therefore best kept as a trade secret.

Tal’s invention fares only somewhat better. While patenting a precise combination of sensed physical parameters might be competition-inhibiting, competitors might find a way to eliminate or substitute one parameter, avoiding infringement. And if so, the entire industry might bypass Elimin8waste’s patents.

Unfortunately, most patents are like these-- not strategically crafted to create commercially valuable blocking positions.

How can Elimin8waste pursue unicorn patent protection? By stepping back from the technical nuances, and considering business realities, Eliminat8waste may realize that to make the technology commercially viable, sorting must occur at high speeds on conveyors, at rates greater than 80 pieces of produce per minute. Otherwise, the technology is simply theoretical and not commercially viable. Therefore, instead of patenting a specific technical nuance that might be difficult to detect, Elimin8waste can protect a “conveyor system” that senses “physical parameters of each piece of produce, determines an indicator related to shelf-life, and sorts each piece of produce based on the indicator.” This definition of the invention is the minimum every competitor will need to compete. Therefore, a patent portfolio containing a patent like this might offer unicorn protection. Notice that while the innovation is enabled by AI, the protection, as broadly articulated, does not mention AI. There is no need. Of course, narrower fallback protection can also be sought to build an even more robust blocking position.

In sum, unicorn patent protection is achieved by stepping back from technical nuance and strategically generalizing protection to block competitive market penetration.