Whiskey’s Good Proofing Water, But It Doesn’t Tell You Who the Real Peaky Blinders Are

Thomas Shelby, the lead character in the British period crime drama Peaky Blinders, said, “Whisky is good proofing water. Tells you who’s real and who isn’t.”  But a federal court in California disagreed in a recent case brought by the show’s producer, denying its motion for a preliminary injunction to prevent the defendants from using the mark PEAKY BLINDER to sell liquor and beer in the United States.  The court said that, for each of its claims, the producer failed to meet the high bar required for a preliminary injunction.

Through its show, Caryn Mandabach Productions Limited (“Mandabach”), the producer of Peaky Blinders and the plaintiff in this case, introduced Americans to the street gang that once operated in turn-of-the-century England.  The gang, based in Birmingham, included characters who were often violent but also loved their whiskey: 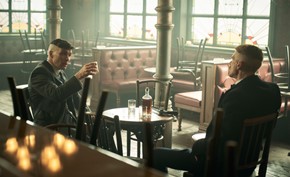 The defendants were two English alcoholic-beverage companies (Sadler and Halewood) and their U.S. distributor (Winebow). In 2017, Sadler filed a trademark application in the U.S. to use the mark PEAKY BLINDER for beer and liquor, including Sadler’s Peaky Blinder Blended Irish Whiskey:

After filing suit, Mandabach sought a preliminary injunction on its complaint, which included claims for (1) unfair competition under both the federal Lanham Act and California law, (2) false designation of origin under the Lanham Act, (3) passing off under the Lanham Act, and (4) false advertising under both the common law and California law.  The court, however, found that Mandabach had failed to demonstrate that any of the relevant factors—likelihood of success, irreparable harm in the absence of an injunction, the balance of equities, or the public interest—favored granting a preliminary injunction.

The court initially addressed Mandabach’s claims of unfair competition and false designation of origin.  After saying that Mandabach would have to establish two things to prevail on these claims—that it owned a valid and protectable mark and that the defendant’s use of the mark was likely to confuse consumers—the court considered the defendants’ argument that the claims were barred by Rogers v. Grimaldi, 875 F.2d 994 (2d Cir. 1989).  Under Rogers, the court said, where a trademark has been used in a way that would normally be infringing, but the mark was allegedly used to communicate “messages and ideas,” that use is actionable under the Lanham Act only where (a) the use had “no artistic relevance to the underlying work whatsoever,” or (b) the use “explicitly misleads as to the source or the content of the work” (quoting E.S.S. Entm’t 2000, Inc. v. Rock Star Video, Inc., 547 F.3d 1095 (9th Cir. 2008)).  To support applying Rogers under the facts of the case, the defendants submitted a declaration from Sadler’s managing director explaining how she had supposedly chosen the name Peaky Blinder. According to the declaration, she “had never heard of [Plaintiff's] Peaky Blinders television program” when she picked the name, nor had anyone else at Sadler’s. Instead, she said, she “felt that Peaky Blinder was an appropriate name” for its dark beer because of the Peaky Blinder gang’s “well-known dark history” “connected” with the dark beer.

Nonetheless, the court did not swallow the defendants’ declaration as “proofing water” that the defendants used the PEAKY BLINDER mark to convey “an idea or point of view.”  Accordingly, it held that Rogers did not apply.  But while this was obviously good news for Mandabach, since it rejected a possible defense, it may have been the court’s last ruling in Mandabach’s favor.

The Court Found That Mandabach Had Failed To Show That the Mark Was Valid and Protectable.

The court then considered whether Mandabach had established that it was likely to succeed in establishing the first element of its claims of unfair competition and false designation of origin: that the PEAKY BLINDERS mark, as used in connection with its TV program, was “valid and protectable.”  Because the mark was unregistered in the U.S., the court said that to establish the validity of the mark, Mandabach had to show either that the mark was inherently distinctive or that it had acquired secondary meaning.  But it found that Mandabach had shown neither.

Initially, the court found that Mandabach had not shown that the mark was inherently distinctive, which required proof that the mark was arbitrary and did not simply suggest something about, or describe, the TV show.  Instead, it said, the mark (considered in the context of the show) did precisely that—it was “likely descriptive or suggestive of a show about a group of persons named the Peaky Blinders”: 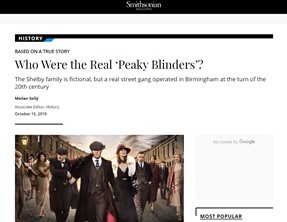 In addition, the court found that Mandabach had also failed to show that the mark had acquired secondary meaning.  Under Ninth Circuit precedent, four factors are considered in determining whether a mark has obtained secondary meaning, but the court found Mandabach’s evidence insufficient.  For example, it said, while the first factor requires proof that actual purchasers of the product associated it with the producer, the evidence Mandabach submitted—screenshots of social media posts—did not show that the people behind the posts were “actual purchasers.”  Similarly, the court found that Mandabach’s evidence on the second factor (sales, advertising, and promotional activities regarding the mark) was insufficient because it showed only that the Peaky Blinders show was popular.  That, the court said, did not demonstrate how viewers perceived the mark and thus that it had acquired secondary meaning.  Next, regarding the third factor (the length and manner of the mark’s use), the court recognized that Peaky Blinders had been running on Netflix since 2014, but it said that “extensive use alone is insufficient to establish secondary meaning.”  And finally, the court said that Mandabach had not submitted any evidence on the fourth factor—that its use of the mark was “exclusive.”

The Court Then Addressed the Rest of the Issues but Concluded That None of Them Supported Granting a Preliminary Injunction.

Without a valid or protectable mark to enforce, the court might have ended its analysis.  Instead, it said that even assuming that the PEAKY BLINDERS mark was distinctive or had acquired secondary meaning, Mandabach also had to establish a “likelihood of confusion,” but had failed to do that.  The court analyzed the situation under Mattel, Inc. v. Walking Mountain Products, 353 F.3d 792 (9th Cir. 2003), and it held that only three of the eight relevant factors favored finding a likelihood of confusion.  As a result, the court held that Mandabach had failed to make the “clear showing” of a likelihood of confusion that is required at the preliminary-injunction stage.

Next, the court turned to Mandabach’s other claims—false advertising and passing off—which it dispensed with in a single paragraph.  In particular, the court set out the elements of both claims and gave short shrift to Mandabach’s arguments, saying simply that it “does not prove these elements of its false advertising and passing off claims, and therefore fails to demonstrate a likelihood of success on these claims.”

In addition, the court concluded that Mandabach had not shown that it would suffer irreparable harm in the absence of a preliminary injunction, and it also concluded that neither the balance of equities nor the public interest favored granting preliminary relief.  And it reached each of these conclusions easily.

In the first place, the court rejected Mandabach’s argument that it was entitled to a presumption of irreparable harm under the 2020 amendments to the Lanham Act, 15 U.S.C. § 1116(a).  As the court recognized, this presumption applies only when it has been found that the plaintiff has shown that it is likely to succeed on the merits.  Given the court’s decision that Mandabach failed to demonstrate a likelihood of success on any of its claims, it refused to apply the presumption.

Moreover, the court said that even if the presumption of irreparable harm applied, it would have been rebutted because of Mandabach’s delay in seeking its preliminary relief.  As the court observed, Sadler filed its application to register the mark PEAKY BLINDER in 2017 (which could have given Mandabach constructive knowledge of the mark at that time), and Mandabach had actual knowledge that the defendants intended to use the mark in the U.S. by at least April 9, 2018, when Mandabach’s licensee sent a warning letter to Sadler.  Nonetheless, the court said, Mandabach did not sue the defendants until over two years later, on November 6, 2020, and then it waited almost four months more, until March 1, 2021, to file its motion for a preliminary injunction.  Under these circumstances, the court concluded, Mandabach had failed to show that it would suffer irreparable harm absent preliminary relief.

Addressing the final issue, the public interest, the court recognized both the public’s interest in avoiding confusion between products and also that trademarks protect that interest because they accurately indicate the source of a product.  But because it had found that Mandabach had shown neither that it had an ownership interest in a valid and protectable trademark nor a likelihood of confusion, the court concluded that it had failed to show that the public interest favored a preliminary injunction.

Rule One learned from Peaky Blinders: “Don’t punch above your weight.”  The bar for a preliminary injunction is high—to prevail, you need to act promptly and you also need to have the necessary evidence.