How Sports Tech Companies Can Fight Back Against Patent Trolls 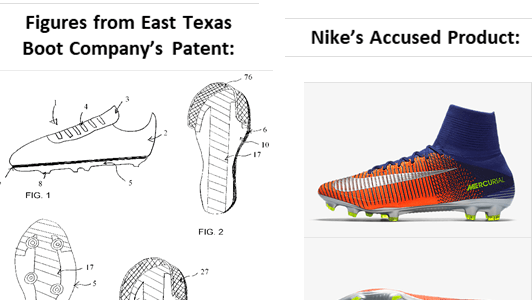 Sports technology companies have become the latest in a long line of targets for patent trolls or "non-practicing entities" (NPEs). We previously discussed the world of these trolls in 2016. But there is hope for real companies to fight back against those trolls. Two main strategies present opportunities other than settling. One is an Inter Partes Review that attempts to invalidate a patent, the other is uniting with other defendants in a joint defense group.

NPEs own patents, but do not produce anything that implements the inventions protected by those patents. Instead, NPEs monetize their patents by asserting patent infringement against companies that do produce goods and services related to that intellectual property. In most instances, NPEs sue or threaten to sue companies, but back off if their targets pay a fee.

In May 2016, Tellus Fit LLC asserted a patent covering a GPS-enabled exercise wristwatch against 13 defendants, including Adidas and Fitbit, in the Eastern District of Texas. With the recent surge in smartwatch and fitness tracker development, Tellus easily found patent assertion targets, such as Fitbit’s Surge fitness watch.

A year later, Tellus Fit LLC had voluntarily sought dismissal of all 13 cases, and the court had granted all of Tellus’ motions to dismiss. This suggests that Tellus and the defendants reached an agreement to settle their disputes. That would follow the typical NPE practice of seeking a quick monetary return and settlement well before cases reach trial.

These lawsuits follow a typical pattern. An NPE that asserts its patents often makes meticulous calculations to determine how much money defendants are willing to spend in order to defend a lawsuit, and price their settlement offer just below that threshold. This incentivizes defendants to settle, because the costs of litigation outweigh the costs of settlement.

Another NPE, Sportbrain, has asserted a single patent against more than 100 defendants over the last five years. But Sportbrain recently had that same patent invalidated by the Patent Trial and Appeal Board (PTAB) at the U.S. Patent and Trademark Office (USPTO) in a proceeding called an Inter Partes Review (IPR). 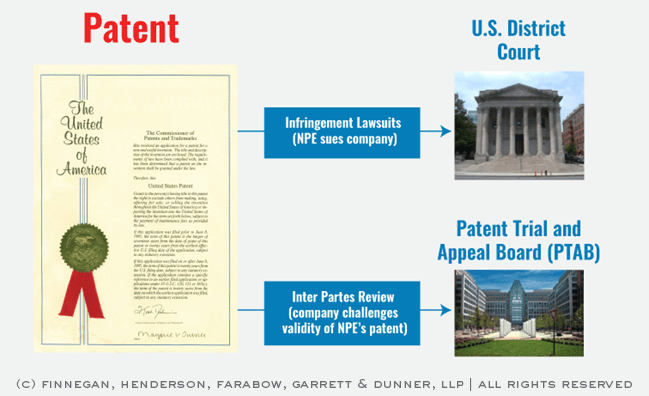 Many of Sportbrain’s defendants operate in the sporting goods industry, including Oakley, Catapult Sports, Whoop, and New Balance Athletics. The patent that Sportbrain had asserted relates to a pedometer, or a method for tracking a person’s steps, comparing those statistics to those of other users, and presenting feedback to the person. Like typical patent troll cases, many of the products targeted by Sportbrain did not directly relate to pedometers. And most of these lawsuits were dismissed.

But unlike in the Tellus example, a court handling one of the Sportbrain cases granted a stay, awaiting the outcome of an IPR. Even still, in October 2017, the same month during which oral arguments were held in the IPR, Sportbrain initiated lawsuits against 19 new defendants. Ultimately, the PTAB found Sportbrain’s patent invalid.

The Sportbrain case illustrates how IPR proceedings can form a powerful and efficient tool for defendants. They serve as a unique means for parties to challenge the validity of a patent. In an IPR, the petitioner, or patent challenger, argues that the court should invalidate a granted patent based on references that precede the filing of the patent at issue. The PTAB will then issue a decision listing which parts of the patent may be contested during trial. Assuming the parties do not settle after that decision, they will proceed to a trial in front of a panel of three PTAB judges, and that panel will determine which portions of the patent, if any, are invalid.

IPRs have many aspects that can favor those challenging patents. First, they (currently) use a broader claim construction standard than regular district court proceedings. This means a PTAB panel is more likely to interpret any claims in a favorable light for invalidity purposes. Second, the PTAB applies a lower burden of proof in IPRs. The petitioner only has to prove its case by a "preponderance of the evidence" standard, a noticeably lower burden than the standard of "clear and convincing evidence" that district courts follow. Last, unlike in district court proceedings, patents are not presumed valid before the PTAB.

The USPTO receives a significant number of IPR requests every month, as many defendants use these proceedings to invalidate NPE patents before a related district court case concludes. If a party files an IPR petition at the early stages of a district court litigation, the court will often stay, or pause, its case until the IPR concludes.

Despite the promise of IPRs, they often do not appeal to defendants who are influenced by collective action problems. In these situations, a large number of individuals may have a common interest, that interest is spread among the individuals.

Working alone, most entities would rather pay a licensing fee than face the costs required to litigate against an NPE. Together, all of these entities would likely have the resources and willingness to do that, because spreading the litigation costs across a large group reduces the burden on each entity. But patent trolls take advantage of this situation by asserting their patents against individual entities one by one. Individual defendants settle, fearing the potential of enormous costs. 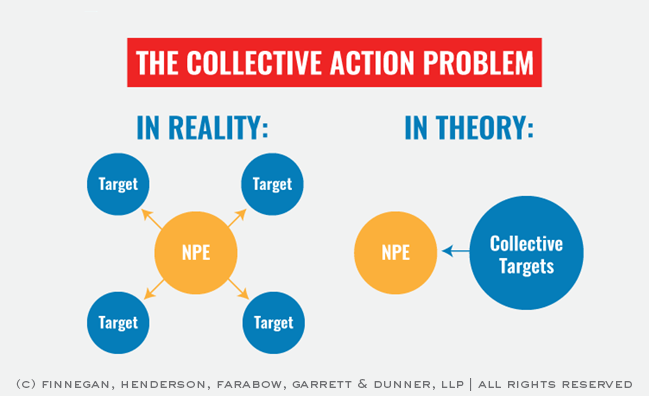 However, when an NPE sues multiple companies who have become co-defendants in the same case, those defendants can form a joint defense group (JDG). In a JDG, the law firms representing each defendant band together, enabling them to share information and strategies. In some cases, co-defendants even hire the same law firm to represent them. Not only can this save defendants money, but it can also help them coordinate their defense, potentially increasing the chances of having a positive outcome from the lawsuit. Legally, members of a JDG benefit from a "common interest privilege," which allows them to share information without waiving attorney-client privileges or risk being forced to provide privately-shared documents. Like IPRs, JDGs are another tool that defendants can use to challenge patent troll lawsuits, but they have their own potential drawbacks, too.

Current U.S. Patent and Trademark Office rules state that parties who request an IPR and those closely connected to them cannot raise new, related issues in a subsequent IPR. Joint defense group members sometimes have the concern that if another member initiates an Inter Partes Review and fails to reach a favorable result, this will prevent other members from requesting IPRs of their own. While USPTO guidance is that JDG membership will not, by itself, prevent a party from requesting an IPR after another member has filed its own, members may want to carefully consider how being part of a collective action may affect their own legal strategy. 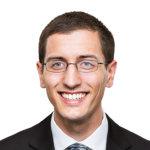 Originally printed in SportTechie on July 27, 2018. This article is for informational purposes, is not intended to constitute legal advice, and may be considered advertising under applicable state laws. This article is only the opinion of the authors and is not attributable to Finnegan, Henderson, Farabow, Garrett & Dunner, LLP, or the firm’s clients.