By Frank A. DeCosta III, Ph.D.

The US Court of Appeals for the Federal Circuit has rejected an attempt by researcher Stephen Thaler to name an artificial intelligence (AI) machine that he created as the inventor of two patents. This decision upholds a September decision by a Virginia federal judge.

In the ruling handed down on August 5, the three-judge panel stated that the US Patent Act is clear that only human beings qualify as inventors, and that only natural persons can be an inventor under the law. This decision follows a similar overseas ruling in a case involving Thaler where the board that oversees the European Patent Office appeals also determined that AI cannot be listed as an inventor on patents. So does this end the question of whether AI can be an inventor on patents? And what will this mean for AI in the IP space moving forward?

The Federal Circuit’s decision does provide a nominal bright line rule requiring an ‘inventor’ to be a human. This provides clarity on the front end, supporting the US Patent and Trademark Office’s decision to reject patent applications where the inventor is declared to be AI. The record on appeal meant that the court was able to resolve a pure question of law —because the applicant was declared to be AI.

The more complex question that the court did not have to confront in this case is what level of reliance on AI in the invention process would deprive a human from having standing to claim inventorship. Put another way, if AI is used as a tool to create an invention, then, just as with more traditional inventions, the use of tools to carry out an invention does not bar an applicant’s claim of inventorship. But, under the current Federal Circuit ruling, if the role of AI in the inventive process rises to the level of an inventor, then the invention is disqualified from eligibility for patent protection. This is a factual question with perhaps some very difficult ‘line drawing’ that was avoided by the Thaler case, that may well lie ahead in other cases.

Note that this type of line drawing is not unprecedented. Our analysis of inventorship under US law routinely requires consideration of whether the contributions of human collaborators make them an inventor. If so, the human is named on the patent application as an inventor and prosecution of the patent moves forward. Under the Thaler ruling, however, if the same inventorship analysis concludes that AI is an inventor, because AI can’t be named as an inventor, the AI claims are ineligible for patent protection.

The ruling touches on the key issue of whether an AI should own property. Under US law, patent ownership initially vests with the inventor. A patent is a property right that can be assigned, sold, pledged as collateral, licensed, enforced in court, etc. If AI were permitted to be an inventor it would, through the grant of a patent, have a property right.  This raises a policy question: do we want AI to have property rights (or any type of rights)?

AI, once only a research challenge, is now becoming a commodity technology that is omnipresent in many commercial products. As technology evolves, AI is developing intelligence evolving towards being able to meet the requirements articulated in the law separating assistants and tools from being inventors.

Long term, a bright line rule potentially eliminating an entire class of technology from patent eligibility could foreclose economic progress in some sectors. Conversely, adapting patent rules to meet AI technology as it evolves could promote innovation if balanced against other policy and statutory constraints. 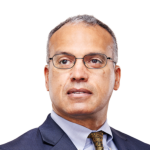 Originally printed in World Intellectual Property Review on August 16, 2022. This article is for informational purposes, is not intended to constitute legal advice, and may be considered advertising under applicable state laws. This article is only the opinion of the authors and is not attributable to Finnegan, Henderson, Farabow, Garrett & Dunner, LLP, or the firm’s clients.