James Concannon, a multi-disciplinary artist, sued the toy company Lego in the United States District Court of Connecticut for copyright infringement. Concannon asserts that he created a custom leather jacket as a gift for Antoni Porowski, star of Netflix’s Queer Eye series, and that Lego’s “Queer Eye – The Fab 5 Loft” toy set includes a jacket that infringes his design. 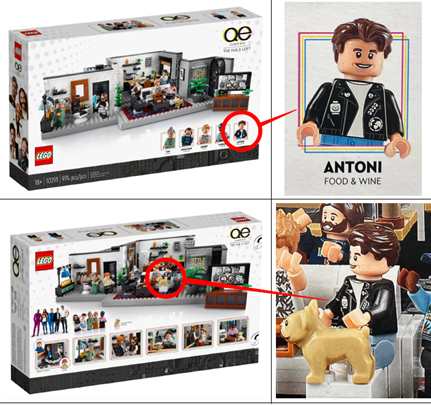 Concannon’s complaint alleges that whereas Queer Eye’s production team usually obtained his permission for Mr. Porowski to wear his designs on the show, he was never contacted regarding the jacket at issue. Concannon claims that although “[h]e was happy to see his work featured on the show” and “appreciated that Porowski often credited him as the creator of the works that appeared on the show,” he never granted “Netflix a license to display the jacket on the show” and that “he certainly never agreed to allow Lego . . . to commercially exploit his artwork for free.”

Concannon claims that the jacket he gave to Mr. Porowski features Concannon’s “original artwork, composed and arranged in Concannon’s signature propaganda-infused aesthetic.” Although Concannon registered the artwork embodied in the jacket, it was not registered until November 29, 2021 substantially postdating the claimed first publication date of September 14, 2018. Because the complaint alleges that Lego began using the allegedly infringing design as early as September 2021, Concannon is not entitled to statutory damages or attorneys’ fees, even if his infringement claims succeed.

Concannon’s complaint alleges that the “Lego set “includes a virtually identical copy of the” jacket. He further claims that “LEGO painstakingly copied not only the individual creative elements of the [the jacket], but the unique placement, coordination, and arrangement of those individual artistic elements as well.” To make this point, he included the below side-by-side images in the complaint: 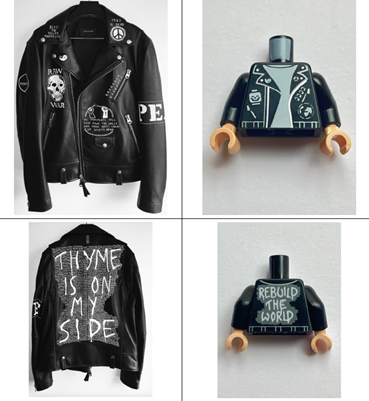 On February 15, 2022, Concannon filed an amended complaint, adding a claim of federal trade dress infringement and unfair competition as well as a claim of violation of the Connecticut Unfair Trade Practices Act.

While Concannon’s case focuses on fashion in one of its most miniscule forms, it may have larger repercussions. Lego filed a motion for a pre-filing conference, expressing its intent to file a motion to dismiss Concannon’s amended complaint in its entirety. If, however, the case proceeds to the merits, the court will likely apply the principles set forth in Star Athletica, LLC v. Varsity Brands, Inc., 137 S. Ct. 1002 (2017) to Concannon’s copyright claims. Although useful articles, such as the manner in which an item of clothing is tailored, are not protectable under copyright law, designs applied to clothing have been protected since the 1950s. In Star Athletica, the Supreme Court essentially maintained that status quo. The Court grappled with the question of what happens to a painting or sculpture when it is applied to a useful article, in that case, cheerleading uniforms. In its decision, the Court looked back at the language of the Copyright Act which essentially states that anything that is separable, sufficiently original, and fixed in a tangible medium of expression is subject to copyright protection. Holding copyright law as medium agnostic, the Court evaluated whether the design on the cheerleading uniforms could be conceptualized as something not completely utilitarian. In finding that Varsity’s designs on the cheerleading uniforms were copyrightable, the Court first held that they have pictorial, graphic, or sculptural qualities. Second, the Court held that if these designs were separated from the cheerleading uniforms and applied in another medium, such as a painter’s canvas, they would qualify as works of art.

Divorced from Reality: Eastern District of Texas Calls Out “Frivolous” Arguments in Motion for Summary Judgment